I attended the inauguration of Governor Benigno Repeki Fitial and Lieutenant Governor Timothy Pangelinan Villagomez of the CNMI on January 9, 2006. This page is a report during my stay at the CNMI and a proposal for recovering the CNMI’s economy.

1 : The inauguration of the new Governor

I was invited to attend the public inauguration rites held at the Marianas High School gymnasium, Saipan, in connection with a publisher engaged in this area. It was my first overseas travel. Here are some photos I took during the ceremony.

Fig.02. The traditional ceremony of announcing the inauguration, sawii/kulu (blowing of the horn). 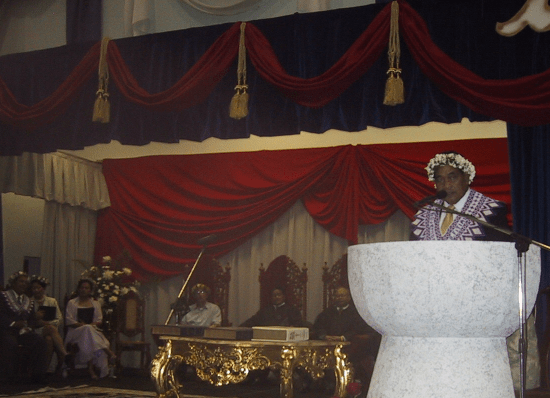 In this speech he set a goal of attracting one million tourists to the CNMI per year over the next four years, re-focusing on the Japan travel market. Fig.05. They danced in native dress of various nations.

Japan is their nearest advanced economy. About thirty thousand Japanese settlers used to live on Saipan before the Second World War, but I found nobody dancing in Japanese costume after the closing ceremony. Very few except the old could understand Japanese. I felt the presence of Japan was getting smaller.

The CNMI is the Commonwealth of the Northern Mariana Islands, a territory with U.S. commonwealth status, whose population mainly resides on Saipan, Tinian, and Rota. As the map below shows, the CNMI is located in the West Pacific Ocean. The Northern Mariana Islands were once under the regime of Japan. After the First World War, the League of Nations entrusted them to Japan as a mandate territory. In 1921, Matsue, Haruji (松江春次) founded Nanyo Kohatsu Co. Ltd. (南洋興発株式会社) that developed the sugar industry and its related enterprises at Saipan, Tinian and Rota. His business succeeded and the population of islands amounted to fifty thousand. Fig.07. A reminiscence of the Japanese regime at Rota – a locomotive.

His company, however, was closed, because the U.S. military invaded and occupied the Mariana Islands during the Second World War. After Japan’s defeat, the U.S. administered the islands as part of the U.N. Trust Territory of the Pacific Islands.

3 : Why has the CNMI’s economy gone wrong?

The U.S. began to compensate the Marshall islanders for nuclear testing at Bikini Atoll in 1975. In 1980, the U.S. Department of Agriculture worked with the CNMI to design food stamp programs. Islanders worked for agriculture under the regime of Japan, but they now can live without working because of food stamps.

Agriculture has waned owing to the food subsidies. An old man living in a village of Saipan deplores the decline of agriculture.

Now you don’t have to be a farmer. You can become lazy, go and apply for food stamps, and survive. In the olden days, there were no food stamps. People had to go out there and plant or go out there and fish. Today, there are quite a few people on food stamp programs here in this village.[2]

Until recently the CNMI prospered thanks to garment manufacturing and tourism. But the government spending has exceeded the decreasing revenues since 2002 and the CNMI virtually went bankrupt in 2006. Why has the CNMI’s economy gone wrong?

Although most of the native islanders, Chamorro people, do not work, immigrants from Asia have been engaged in the tourist and the garment industries. So far these industries supported government finance, islanders worry about nothing. But today both industries have come to a crisis and that is why the CNMI is in an economical predicament.

Saipan flourished thanks to many tourists from Japan. But the number of Japanese tourists decreased year by year and in October 2005 JAL (Japan Airlines) decided suspension of all flights to Saipan[3]. Saipan is no longer attractive to Japanese. It has lost beautiful sea it used to have. Failure in waste disposal has caused water pollution.

Instead of Saipan, Rota has attracted Japanese tourists. It still has beautiful sea that Saipan used to have.

But I am afraid Rota might repeat the same mistake that Saipan made. People in Rota do not dispose waste. They just throw away their garbage and do nothing special, as the pictures below shows. Because the population of Rota is much smaller than that of Saipan, the garbage has not polluted seawater yet. But its bad influence has already appeared. Flies have proliferated and swarm on human meal, which annoys tourists. The dumping site is not far from the most popular beach of the island, Teteto Beach. Someday the dirty rainwater that percolates through garbage heaps might penetrate into Teteto Beach. 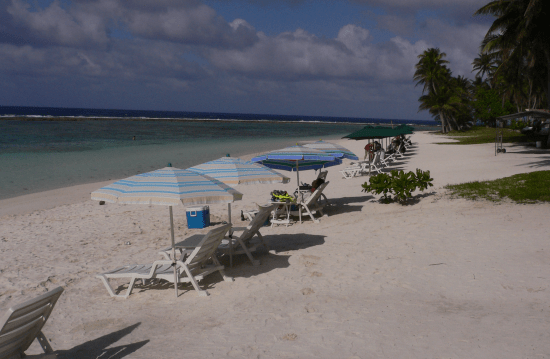 Another biggest industry that has supported the economy of the CNMI is garment industry. Garment manufacturers from the People’s Republic of China transplanted their operations to the CNMI, because they could enjoy benefits that exceeded those enjoyed by foreign or the U.S. mainland manufacturers, that is to say, they were not subject to the U.S. minimum wage, had to pay no duty on fabrics they import, free from import quota restriction and yet could sell their products to the mainland U.S. with domestic label.

Saipan’s garment industry peaked in 1999 with over one billion dollars in exports, but in January 2005 the U.S. changed trade law and abolished the import quota restriction. Thus the CNMI’s garment industry has declined in recent years with factory closings and reduced production. The value of garment shipments to the United States dropped by more than 16 percent between 2004 and 2005 and by an estimated 25 percent in 2006.

After all, the garment industry in the CNMI flourished, utilizing its ambivalent political relation to the U.S. while their products themselves were not competitive. If the CNMI aims at enduring prosperity, it should utilize its truly competitive resources, namely tourist attraction.

My advice on the recovery of the CNMI economy is as follows.

Some skeptics insist that energy outputs from ethanol produced using corn, switchgrass, and wood biomass should be less than the respective fossil energy inputs[4]. But the recent study refutes it, indicating that reported negative net energy incorrectly ignored by-products and used some obsolete data and says that current corn ethanol technologies are much less petroleum-intensive than gasoline[5]. Even if it fails, ethanol from sugar canes can be sold as rum. In short the enterprise of producing ethanol from sugar cane runs a low risk of failure.

To conclude this book, I would like to p ...

The Kyoto Protocol|Entropy and Sustainability (08)

How long can our civilization flourish? ...

People expect that a hydrogen-powered fu ...

About one-third of the world's land surf ...

Today, global warming is the most popula ...

There are many environmental problems th ...

Decentralization of Powers|Entropy and Sustainability (03)

History of Human Systems|Entropy and Sustainability (02)

Since the survival of our systems depend ...

The shortage of natural resources and th ...

Table of Contents|Entropy and Sustainability (00)